Samsung’s next big smartphone, to be introduced this month, will have a strong focus on software. A person who has tried the phone, called the Galaxy S IV, described one feature as particularly new and exciting: Eye scrolling.

The phone will track a user’s eyes to determine where to scroll, said a Samsung employee who spoke on condition of anonymity because he was not authorized to speak to the news media. For example, when users read articles and their eyes reach the bottom of the page, the software will automatically scroll down to reveal the next paragraphs of text.

The source would not explain what technology was being used to track eye movements, nor did he say whether the feature would be demonstrated at the Galaxy S IV press conference, which will be held in New York on March 14. The Samsung employee said that over all, the software features of the new phone outweighed the importance of the hardware. 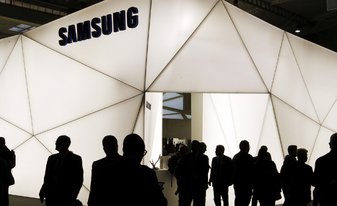 Indeed, Samsung in January filed for a trademark in Europe for the name “Eye Scroll” (No. 011510674). It filed for the “Samsung Eye Scroll” trademark in the United States in February, where it described the service as “Computer application software having a feature of sensing eye movements and scrolling displays of mobile devices, namely, mobile phones, smartphones and tablet computers according to eye movements; digital cameras; mobile telephones; smartphones; tablet computers.”

Samsung has also filed for the trademark “Eye Pause,” without describing what the feature does.

In an interview, Kevin Packingham, Samsung’s chief product officer, declined to share details about Samsung’s next phone. But he said he disagreed that the new hardware would be insignificant compared with the software, and over all, “It’s an amazing phone.”

Eye tracking systems have been in development for a while. Samsung’s current flagship phone, the Galaxy S III, already has a feature that watches you. The feature, Smart Stay, uses its front-facing camera to know to keep the screen lit up when a person is looking at it instead of dimming it automatically.

Tobii, a technology company that received $21 million in funding from Intel last year, has been working on a technique that uses infrared sensors to track precise eye movements.

Samsung’s Galaxy S III has been the company’s best-selling phone, so the release of its next flagship phone has been highly anticipated.